It starts slowly. As a parent, you think at first they might be just a bit tired. They don't want to go to school, but they don't know why. It may be only a day or two every other week at first but it steadily gets worse. You take them to the doctor but he can't find anything wrong physically. He asks if everything is all right at school, are they having trouble with their work or are they being bullied? No clues or answers here.

As a parent of three normal children who had the usual occasional grumble about getting up to go to school, it came as a shock when we realised we were in trouble with our eldest daughter who was nearly 13 at the time. No matter what we did or said the problem just got worse. We made an appointment with the school to find out if they had any idea what might be wrong. At this stage she wasn't seeing or hearing from any of her friends and we wondered if they'd had a fight. We were also on the alert due to repeated statements of "I wish I were dead!" Every parents nightmare. An appointment was made with a psychologist through the public health system. This is the main reason I am telling this story. She was immediately treated as a school refusal, in spite of our continual protests that it was not in her nature to be like this. We were ignored. They decided she was either doing it for attention or that she didn't want to face up to growing up and being a teenager. It was insinuated that she was spoilt and we were to blame. We were told to assert ourselves as parents and get her to school no matter what it took, even forcibly dragging her into the car and dragging her out at the school. Assuming they knew best we did try this a couple of times, but it naturally only made the situation worse.

When I look back, the whole approach they wanted us to take was to humiliate her into submission, which is the worst possible action in phobia cases. After a while we decided we could not go on with this, so it was mutually agreed we stop attending the sessions.

In the meantime we also had to consider her education needs. We had heard about the distance Education Centre from the school and she was enrolled, to repeat year 8 at the start of 1997. This relieved a lot of the stress but was not the answer to the problem. By now she would very rarely leave the house and if we did talk her into coming in the car, she would not get out when we arrived at our destination. The only outings she would agree to were visiting some of our relatives and even then, she would have to know who would be there first. It was about this time we realised that it seemed to be people of her own age that she couldn't face. She was fine with older people (over 30) and young children.

One night we heard the tail end of a news item about Social Phobia on the radio and thought it sounded very similar to her symptoms. I made an appointment at our local doctors to see if I could find out more. I was referred to another psychologist, again through the health system, and appointments were set up. Although I was against it, I was persuaded to sign a letter authorising the release of my daughter's record from the first psychologist. Again, she was treated for school refusal. Many times throughout these sessions, I would describe how she would panic if she were in the car and kids her own age walked past. I also stressed that her behaviour seemed, even to us, to be phobic. The only suggestion? Try to get her back to school.

This psychologist also got nowhere in her treatment and finally discharged her, saying she could do no more. I don't know if you can imagine the feeling of helplessness and despair we felt at this stage. We were her parents; she was looking to us to help her and we could do nothing. She was getting lower and lower mentally and still talking about dying. We were given another referral, this time at the Royal Children's. During this time it was my two younger children's Christmas concert. We talked her into coming, only by allowing her to stay in the car during the performance if she felt the need. Not only is this where she stayed but we also discovered her curled up on the floor so that no one could see her. 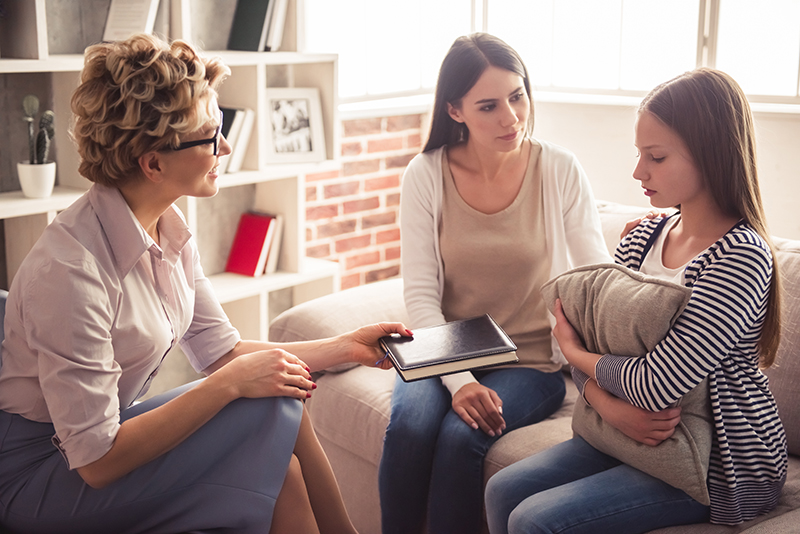 After only three appointments at the Children's, we were informed by letter that we were not in a region covered by the hospital. It was the beginning of 1998 and the anger and frustration we felt at this time was probably nothing to what our daughter was going through. I am ashamed to admit it, but we did give up hope for a while.

Then a light at the end of the tunnel. An article in the paper about social phobia and a psychologist named Catherine Madigan who specialises in this treatment. We rang her the following day to arrange an appointment. Almost as soon as we arrived Catherine asked our daughter one simple question, "How do you feel when you have to go out?" Not one of the others asked this. Unable to put the anxiety she felt into words, Catherine then gave her a sheet of questions on feelings and asked her to fill it in. This questionnaire confirmed the problem exactly - the palpitations, shortness of breath, stomach flutters, feelings of dread. All the symptoms of phobic disorder.

The first thing we were advised to do was have our doctor prescribe anti-depressants for her. This in itself produced a remarkable result. We also enrolled her in the Social Phobia Treatment Group, which consisted of a group therapy meeting, once a week for about three months. Here she was firstly given relaxation training and cognitive therapy and later participated in role-plays of feared situations. I sat in on the first three sessions with her (until she felt able to cope on her own) and was amazed to learn that the most common link in the entire group's fears, was the fear of embarrassment. The most common reason for avoidance of situations was "People will think I'm stupid." This in fact was part of the therapy in the first few weeks. The group was told to think up ways that they could embarrass themselves, create these situations, carry them through and learn that they can live through it.

Within about six weeks of starting this program my daughter asked to go back to school and managed to do so. It is only five months since she started the group therapy and the change in her is phenomenal. She is now a normal teenager who looks forward to going out with her friends and often says "I can't wait for such and such", something she hadn't said for such a long time. She still has days when she is feeling very down, although very few now and she will probably be on medication for quite some time, but she now enjoys life and has a great future to look forward to.

In conclusion, I feel I must alert parents, schools, doctors and psychologists about the symptoms of this widespread problem and to plead with the professionals to listen to what the children and their parents are saying.